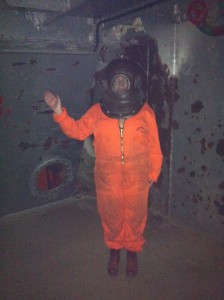 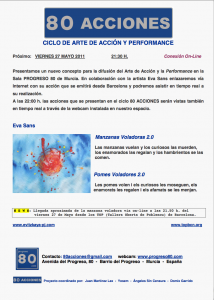 Manzana 2.0
TOP Poblenou BCN – Progreso80, Murcia 2011
A collaboration with the Sala PROGRESO80 Murcia
to present a new concept for the diffusion of Action Art and Performance.
Linked via Internet with the action which was broadcast from TOP Poblenou, Barcelona,
I sent a Green Apple as a symbol of information withheld,
which became Red when Yosem Martinez
as an action that were presented in the cycle 80 ACCIONES. 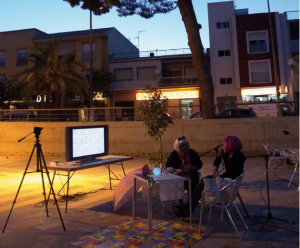 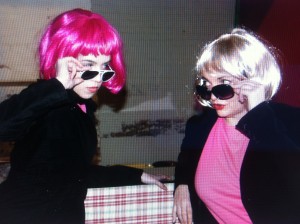 DAMAS CUANTICAS
Fabra i Coats, Barcelona 2010
A performance with Ines Salpico, which raises the question:
Think quantumly allows you to be in more than one place at once? 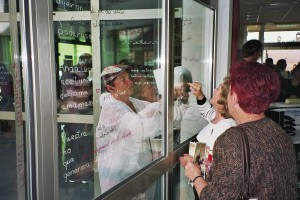 Jam Poética
Biblioteca de San Javier, Murcia 2009
It consisted of live poetry.
I asked to the Library the most popular poems and the recorded them.
They were played like a voiceover while I wrote them on the windows
in the sense that they could be read from the side of the public,
which also had markers to keep writing them.
This experience inspired me the poem “VIVIR AMANDO… MORIR VIVIENDO !” 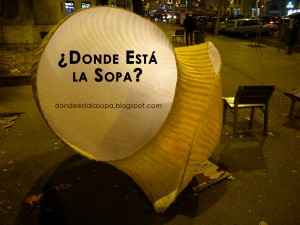 dondeestalasopa.com
Barcelona 2009/2010
From the art collective IN.ES.A.V.E. we questioned the origin and destination
of “26 pasta shells” that the city of Barcelona and Gallina Blanca
offered for Christmas 2009.
And we wonder: Where is the soup? 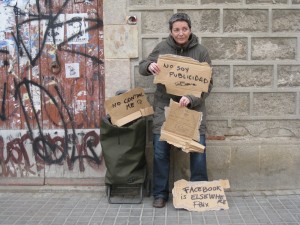 Facing Facebook
El Raval, Barcelona 2009
It consisted of asking Where is Facebook? and passersby stopped to get my bearings.
Presented at “La Capella” during the workshop KUNTSrePUBLIC. 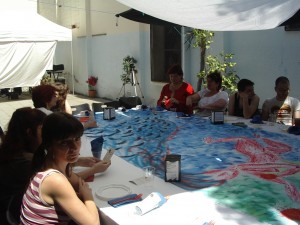