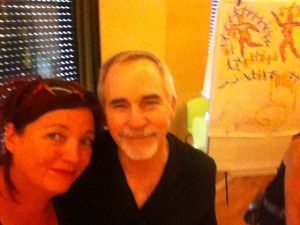 Soundpainting is the universal multidisciplinary live composing sign language for musicians, actors, dancers, and visual Artists. Presently (2014) the language comprises more than 1200 gestures that are signed by the Soundpainter (composer) to indicate the type of material desired of the performers. The creation of the composition is realized, by the Soundpainter, through the parameters of each set of signed gestures. The Soundpainting language was created by Walter Thompson in Woodstock, New York in 1974.

I attended the Sounpainting think tank and I took notes on the syntax of gesture explained by Walter Thompson. After I took part in the basic group with Xalom Cucurella, advanced Soundpainter from Wholegroupplay Catalonian group.

Thanks to Conservatory “El Musical” for a whiteboard, some markers and a large sheet so I could participate in the rehearsal and concert. The daughter of Walter, spontaneously painted too …

neither she nor any child should learn to draw … better do not ever stop painting !!!